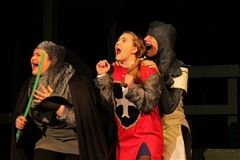 The St. Francis Borgia High School Theater is a 395 seat stadium-seating facility that opened in 2001.
It features a 96 dimmer, fully programmable lighting system with eight lighting positions.  There is a 32 channel sound mixer capable of utilizing wired and wireless microphones, and analog and digital inputs for music and sound effects.

The stage is 40 feet wide and 30 feet deep.  Also included is a large projection screen that is used for media presentations. There are two dressing rooms and a workshop backstage.

The theater lobby is used to showcase current and past shows as well as awards that the Borgia On Stage Society has received. The theater is used throughout the year for plays, theater classes, presentations, concerts, and student theater workshops.
Back