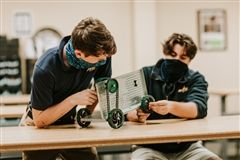 St. Francis Borgia High School’s academic campus was opened at the present site in August of 1981.
The original building has three floors with 26 classrooms and a library. Some classrooms are combination classrooms and science labs. Every classroom has access to Borgia’s wireless network and contains an Apple TV and a 55-inch television for faculty and student presentations. A two-story addition opened in 2001 has 11 additional classrooms, a computer lab, and a theater.

The Art Room is divided into two classrooms. Both classrooms are equipped with deep sinks with running water. The pottery room has four workstations, three pottery wheels, and a kiln. The pottery room is used for both beginning and advanced pottery classes. Projects include using slab, pinching, and coiling techniques.
The other art classroom is used for introduction to art classes and all levels of drawing, painting, and woodcarving.  Student artwork is displayed on bulletin boards throughout the halls.

The Foods Room is equipped with three wall ovens, three full-size stoves, three microwaves, and two refrigerators. In addition to the large equipment, the room has three island workstations with cook-top capabilities and additional small appliances from mixers to blenders. One of the islands is used for preparation and cooking demonstrations.  Students practice culinary skills such as prepping food, cooking techniques, and baking skills throughout the semester.
The Foods Room is also used for Child Development and Housing and Interior Design classes.

During the summer of 2014, the media collection was moved to a renovated classroom on the second floor.  This new library also contains six study carrels which are available for individuals wanting a quiet place to study.  Large tables are available for small groups and a reading area was created for small group discussion or independent reading.  An Apple TV and a 42-inch  television are also available.  The Library is open from 7:30 am until 3:30 pm each day.

The MAC Lab has 20 computers for student use.  The lab is used for classes in Video Productions, Digital Photography, Yearbook, Introduction to Computer Science, Web Page Design, and Computer Program Design. The MAC Lab has an Apple TV and a 55-inch television for faculty and student use. When the lab is not being used for regularly scheduled classes, faculty may reserve the room for their classes and individual students may also use the computers for their projects with the permission of their teacher. The MAC Lab is open daily from 8:20 am to 3:00 pm.

The Music Room located on the first floor was renovated during the summer of 2016. Classes such as Concert Band, Jazz Band, Mixed Chorus, and Chamber Choir are held in the main classroom. Five practice rooms are available for individual practice and digital assessment.

There are five science labs located on the third floor.  The Chemistry Lab was renovated over the summer of 2016. The other science labs were renovated within the past 10 years.  Each science lab has separate lecture and lab areas.  Lab stations are equipped with water, electricity, and gas (when needed). Each laboratory has specialized equipment as necessary for the subjects taught in it, such as microscopes, distillation instruments, a spectrometer, gel electrophoresis equipment, etc. Specialized probes and hubs that can gather and record data on computers or iPads are also found in each lab.

The Science, Technology, Engineering, and Math (STEM) Lab is a new addition to the campus for the 2014-2015 school year. Project Lead The Way classes are held in the STEM Lab. This new lab is divided into 3 areas.
One area has 24 desktop computers which are used for the Intro to Engineering (PLTW) classes, Principles of Engineering Design, Civil Engineering and Architecture, Engineering Design and Development, Computer Science Principles, and the Accounting classes.
A work area with seating for 24 students where students can work individually or in small groups on projects can also be found in the STEM Lab.
A third area is the tool room which has a laser cutter/engraver, a 3-D printer, three scanners, a drill press, and a band saw.
The STEM Lab also has a projector, an Apple TV, a 55-inch television screen, and a laserjet printer.

The Video Production studio is located on the first floor in a space of just over 800 square feet.  The Borgia television production facility contains a four-camera studio operation with a 20-foot green screen and the ability to do remote location work through a variety of sources. The studio utilizes a multi-camera switcher, Mac, and iPad hookups, and an internet feed. The lighting grid has the ability to light five standing set areas that can be built and rebuilt for broadcast needs.
The Knightly News Live, the morning news program, is produced by the Video Production classes and broadcasts using the closed-circuit broadcast system.
Back